Forest of Fall Levels in Baba is You

The Forest of Fall has 20 levels in total and has a heavy focus on the new teleportation mechanic. Here are hints and solutions that will help you complete these levels.

Push push on the heart. It's going to teleport to the next heart due to love is tele, which introduces the teleport mechanic. Teleport yourself also, and try to do it a few times until you're on the right side with the push word.

Move through the heart, capture the flag and win! 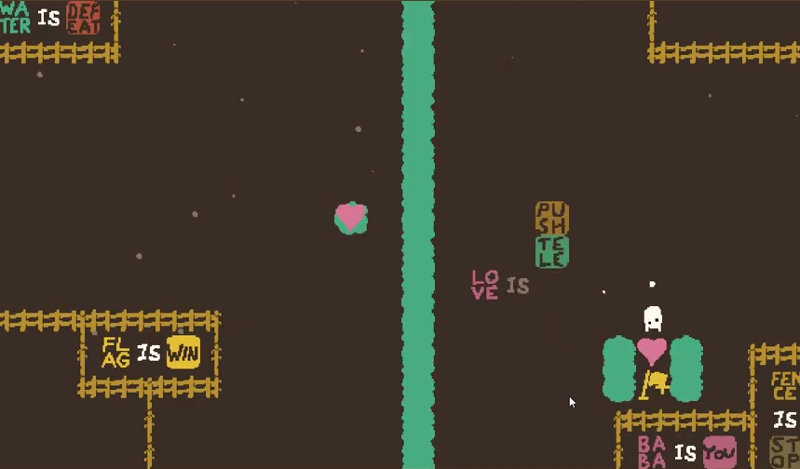 Pull the key to the box to open it, capture the flag and win! 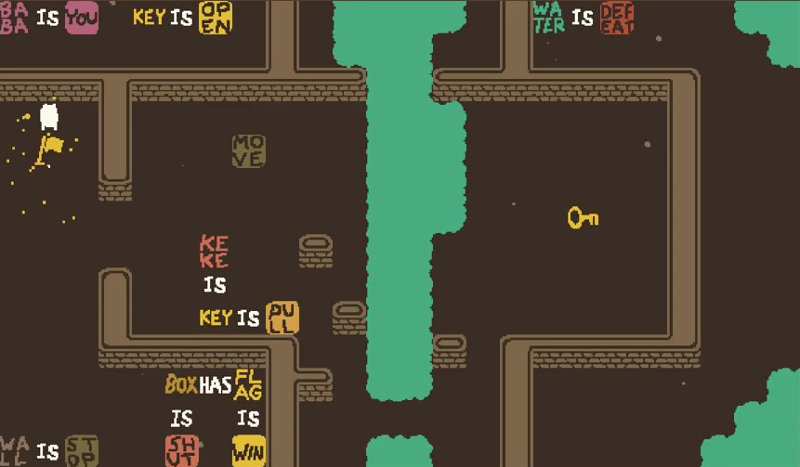 This one is pretty cool, it's like driving a bulldozer. Start by breaking rock is push so that the rock can't be pushed, and then place the push word on the rock. It will start teleporting every turn.

Keep doing that a few time by pushing the rock down until you reach the flag and win! 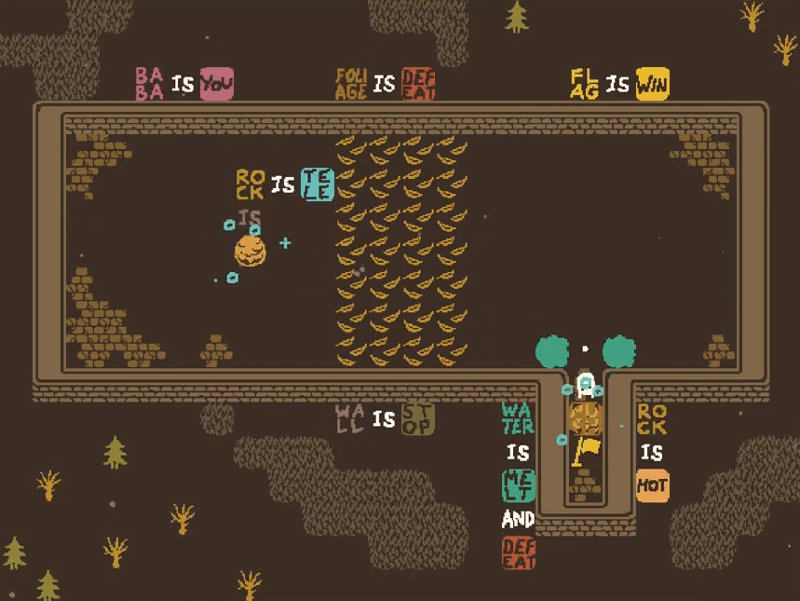 You control two different Baba's. First, make ice is tele and teleport the southern Baba on the other side. Next, break key is push and replace ice is tele by baba is tele and move him over the key that isn't push anymore so that it teleports over to the northern Baba.

Finally, make key is push again so that you can move the key, capture the flag and win! 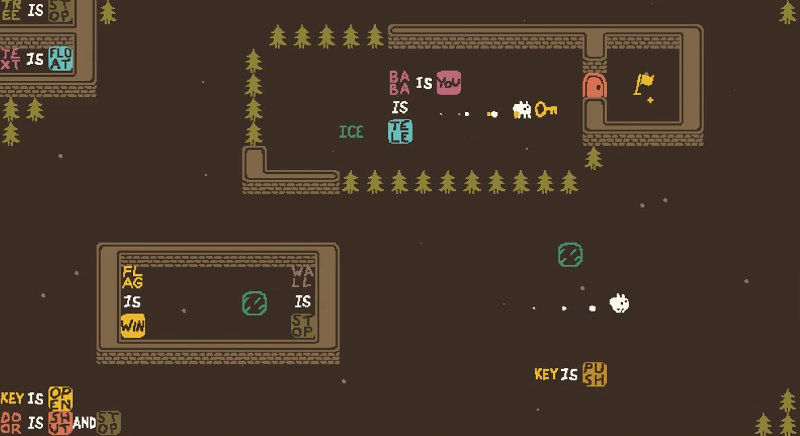 Replace ghost is tele by ghost is push so that you can move them around. Move one between the love word and the win word, and move the other one completely top left. Next, break ghost is push and move the leaf is death rule over him twice, so that he now is located over a is word.

Make ghost is tele and break it again the very next turn. The is word will have been teleported on the other ghost to make love is win.

Capture the heart and win! 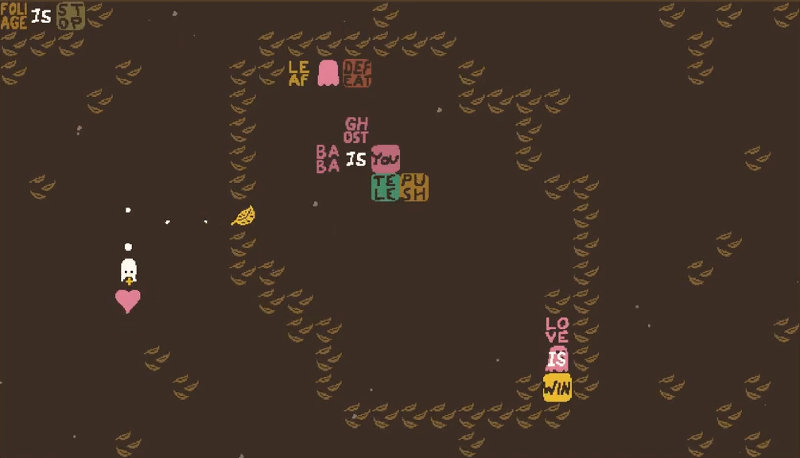 Start by making a full line of 4 boxes, starting from the left side of the flag. There should be an empty square left between the win word and the 4th box. Position yourself there and move to the left; the boxes will all get pulled to the left and the flag too.

Next, you just need to pull the flag to the left and capture it to win! 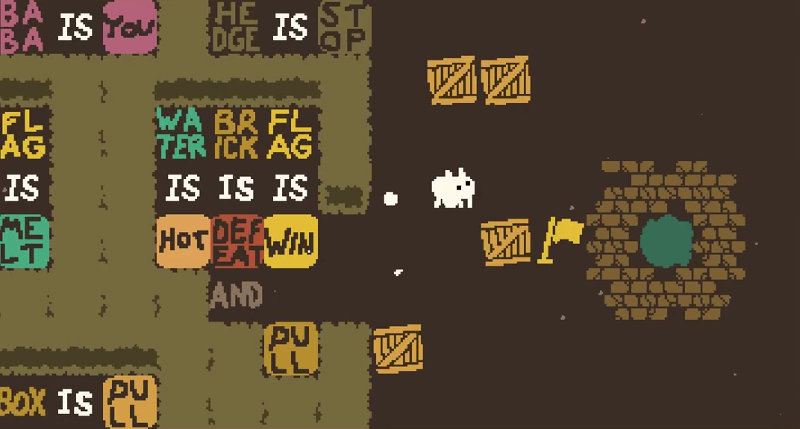 Start by making both Baba is pull and ghost is move. This will make it so the ghost moves automatically, and that Baba can be pulled when behind him. Skip turns and let the ghost move until you can jump right behind him to get pulled over to the key word on the right.

Bring it over to the left side, make key is push, open the door with the key and win! 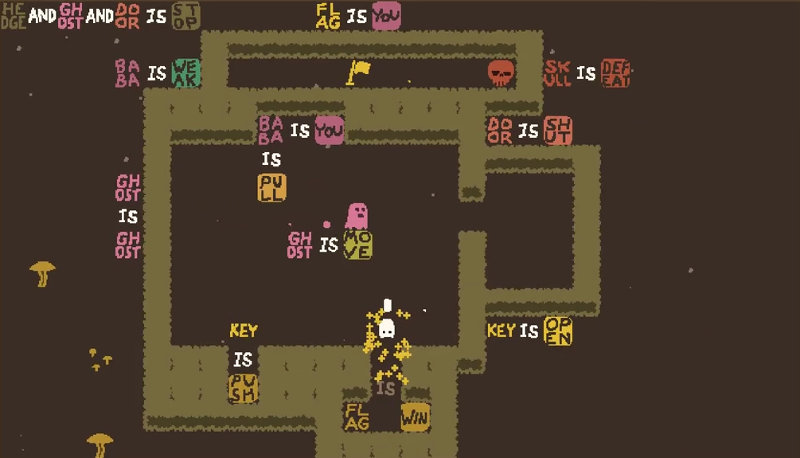 Tricky one! Start with the easy part and push the rock on the foliage, so that it sinks and that the path leading to the ghost is cleared.

Next, use the leaf to teleport and try to make both leaf is tele and leaf is push, with you standing on the leaf when the last sentence is completed. It will teleport you back south. 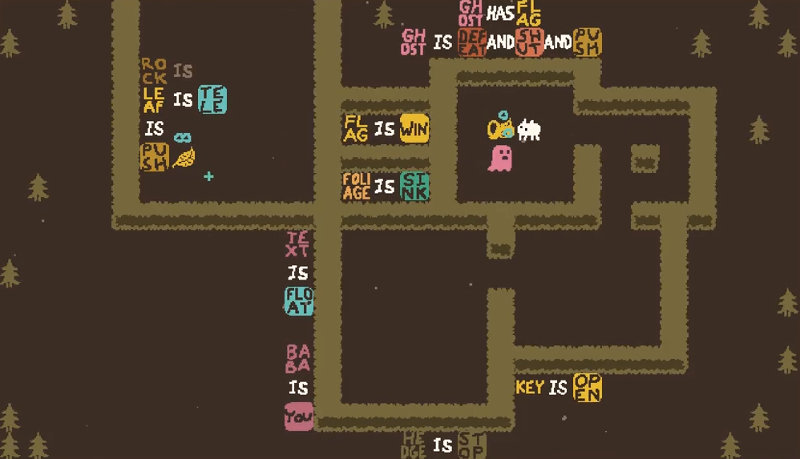 Now, pull the leaf down from the foliage so that it is stuck between the two walls, and make the leaf move again so that it moves to the fungus which will get pulled by it vertically.

Once the fungus is out of the little hole top, stop the movement again and use the second leaf to pull it outside of the foliage. If you push the leaf right by it and switch to leaf is pull, you will be able to pull them both out of the foliage.

After that, pull the key and push it on the fungus to capture the flag and win! 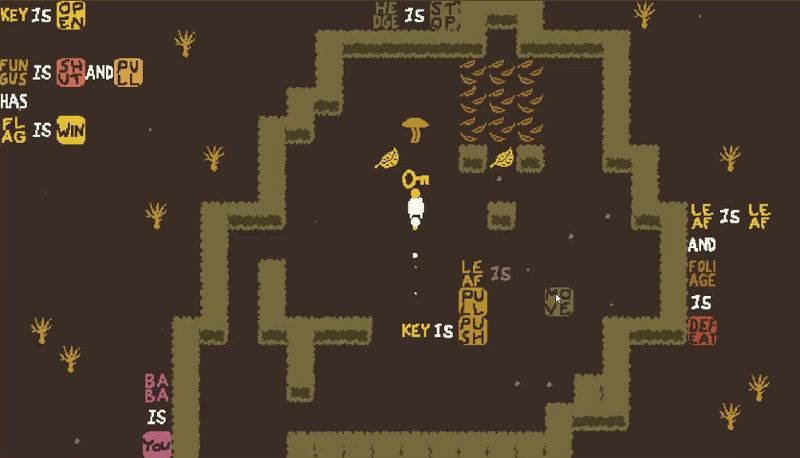 Following a few tricky levels, this one is actually very easy. Simply make fence is not stop, which will overwrite fence is stop. You can now move through fences.

Move the words at the bottom to make Baba is win for the victory! 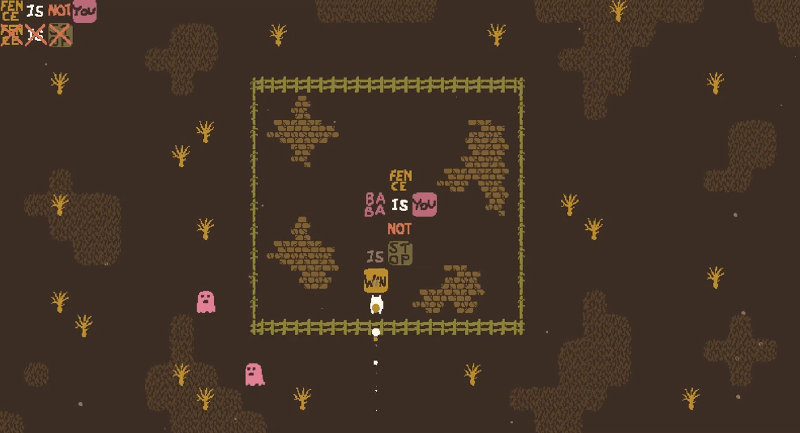 Your goal here is to bring the not word south, so that you can get access to the flag with not Baba is not you instead of Baba is not you, which would make you lose the level.

Make rock is push and move one in the water just by the words. You can push the water around to make a clean path. Keep a rock to sink the 2nd water square on the left of the Baba word.

Once the not word is nearby, make not Baba is not you, capture the flag and win! 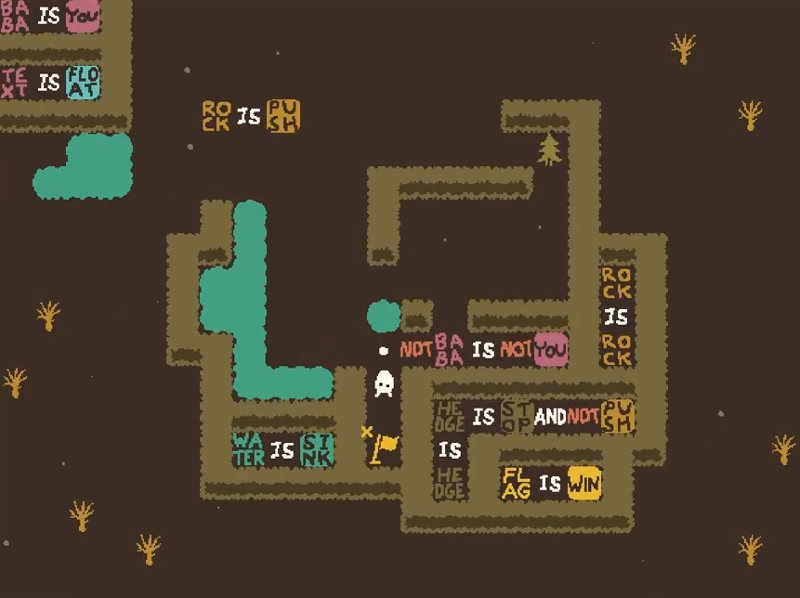 This level's goal is to teach using the double negative. Break flag is not box and make box is not not push. This effectively has the same effect as box is push.

Sink the two boxes by pushing them into the water to move the flag on Me and win! 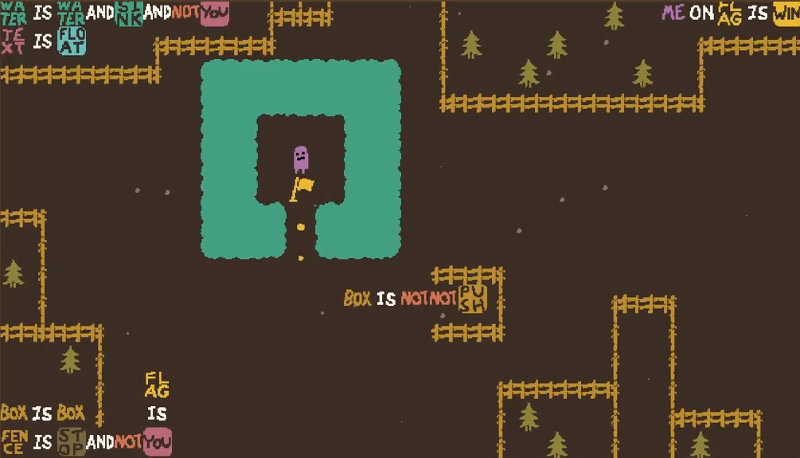 Walls become text and you can now move them to capture the flag and win! 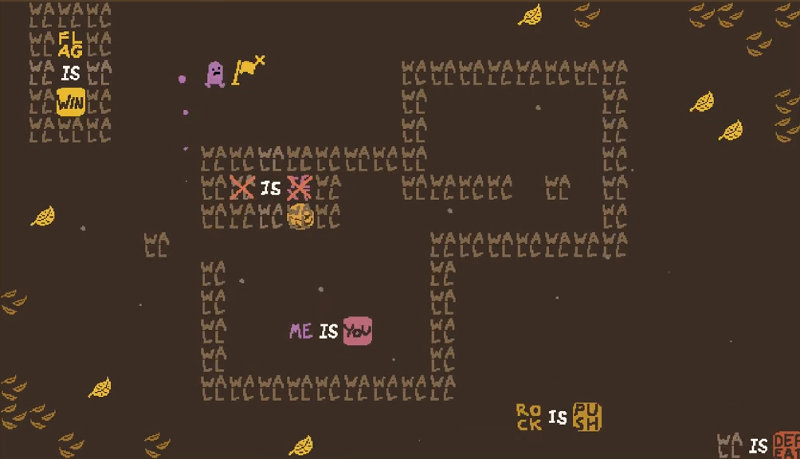 This one is very difficult. First, make box is Keke to gain control of two Keke's. Use the water with one to teleport and place in front of is win just like if he was a word. Then make flag is you so that the Keke that is in front of is win stops moving.

Now here's the twist. Make Keke is text; the two Keke's become text and the one that is top right will make a new win condition: Keke is win. The only problem is that there is no Keke around.

Make flag is Keke. You now have one!

Finally, make text is you. You're going to gain control of a lot of text. Move it all around and try to use the walls to transform text is you into Keke is you.

That will get you the win. Good luck! 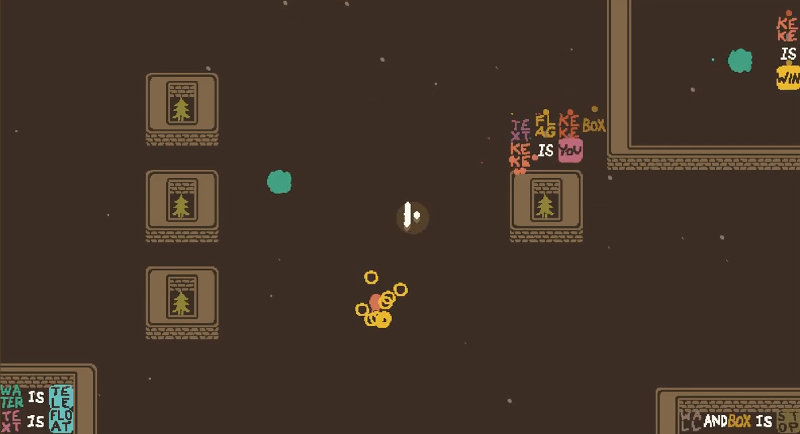 Start by making text is weak. You can now break text if you push it against a wall. Break down skull is defeat that way.

Next, make Keke is Baba to gain control of the Keke bottom left and then make flag is win. Finally, replace text is weak by text is hot and push text on the ghost to melt it.

Capture the flag and win! 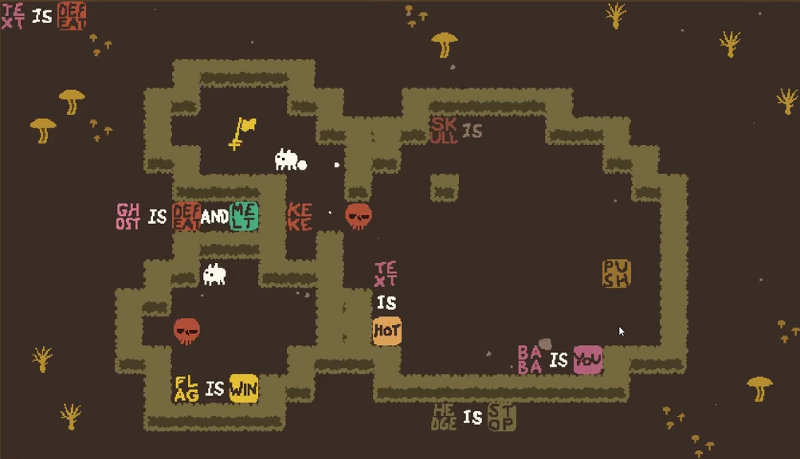 This one is fun! Make text has Baba in addition to Baba is you, and push the keke text into the water to sink it. It will reveal a second Baba.

Now, do the exact opposite. Break text has Baba to make Baba has text and sacrifice a Baba in the water bottom right. It will reveal a Baba text and create Baba is float.

With your remaining Baba, you can now float above the water and the skull to make flag is win.

Come back, break Baba is float and capture the flag to win! 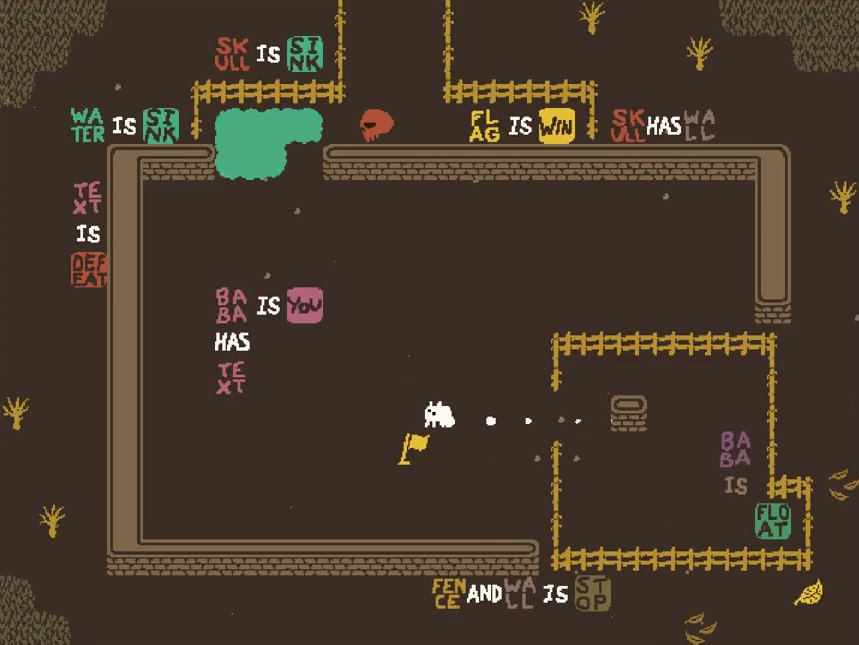 Make both text is you and Baba is push by playing a bit with the wall. Next, sacrifice the push word to push Baba over the skulls to the other side.

Play with the wall again to make Baba is you, capture the flag and win! 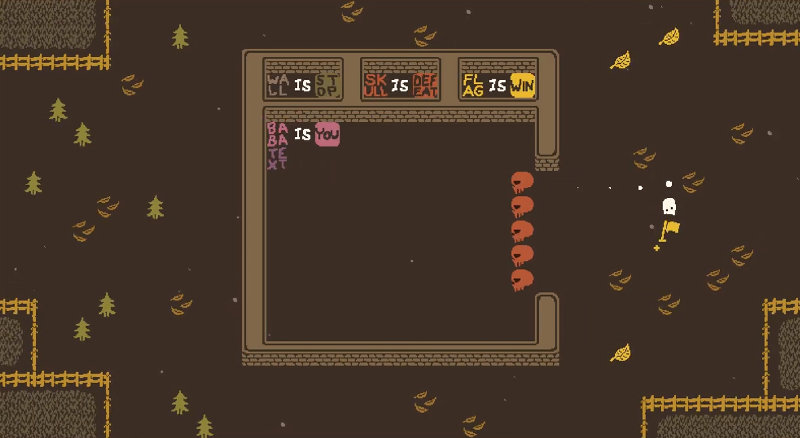 This one is visually similar to Hop. Just like in Hop, start by moving the push word and Baba on the other side. Next, make love is push and push a heart into the river and then replace love is push by love is tele to breach the river.

You will now be able to cross over to the left side. Repeat the same operation with a river square nearby the flag so that you can capture it and win! 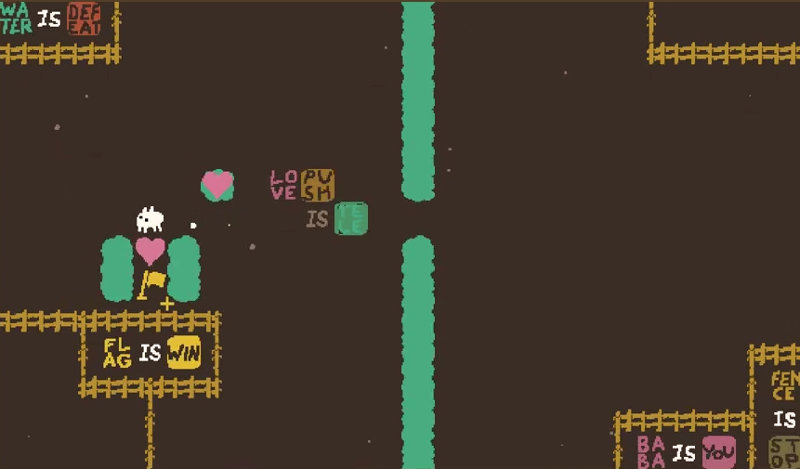 Visually similar to the Not there level, but without the is word that made Baba is win possible.

Do the same thing with fence is not stop, but with all the words just by the fence. The trick is to move the win word on the fence, just by the not word so that you're able to make fence is win and move on a fence in a single play to win! 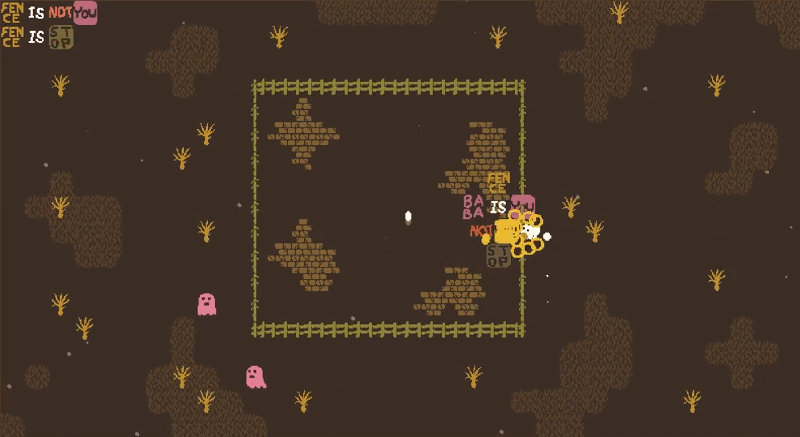 This one is similar to Scenic Pond, but you have to get a win without float.

The trick here is to keep alternating text has Baba and Baba has text until the pool at the top is cleared. The last sacrifice should be on a water square in the bottom row, so that you are able to push the final Baba word.

Make Baba has Baba is you. You now spawn a new Baba if you get destroyed and are effectively indestructible!

Die to the skull to make flag is win, come back and die again, capture the flag and win! 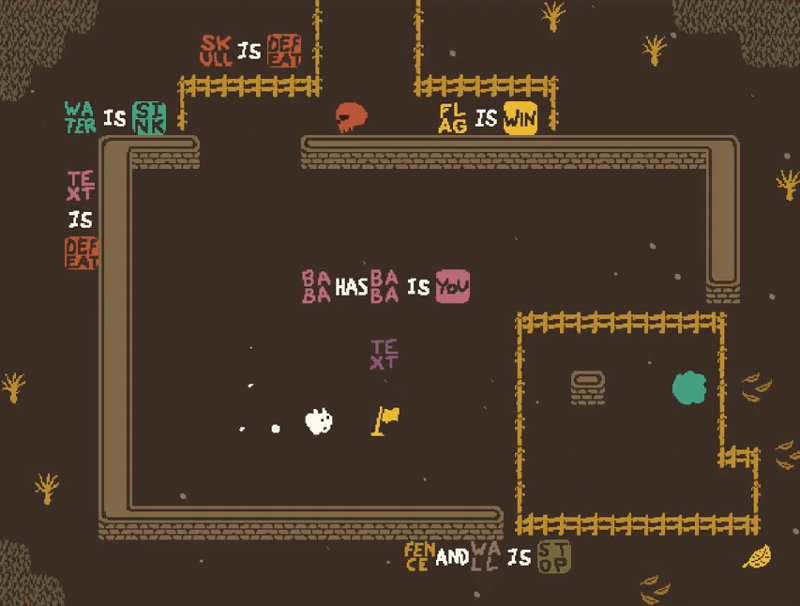