This is a small guide to help you beat the sonorous prophet, the fulminating prophet and the gibbering prophet in the ruins dungeon.

At the beginning of each turn, the Prophet will use a skill called Calamitous Prognostication on one or two positions of heroes in the party. And at the end of each turn, he will use the Rubble of Ruin skill on the heroes that will be located at these positions.

The skill does a lot of damage and can easily bring a hero with little defense to 0% health with a critical hit!

The trick is to understand that the heroes themselves are not marked at the beginning of the turn, only the positions. So you can move the heroes or use protection skills to make sure that the weaker heroes are not the ones who will receive the damage.

The Prophet is in rank 4 and he will not move from there, his resistance to movement is incredible.

Three pews are placed in front of him. These are simple walls but they have more life points in total than the boss himself so it is important to be able to attack him directly in rank 4 otherwise, the fight will drag on and there will be a lot more chances for a bad surprise.

The Man-at-Arms is an excellent answer to the Rubble of Ruin skill, since it can protect an ally in a position marked by the Prophet at the beginning of the turn.

The Shieldbreaker is also excellent. She can absorb all the damage with her shield skill, and she can also attack the fourth position with her spear. Be sure to select a skill that allows you to attack while backing off, in addition to the attack with the spear that advances. She can then easily be moved left or right to position itself on the marked position and absorb the damage.

Here is a screenshot of a fight to illustrate the tactics. 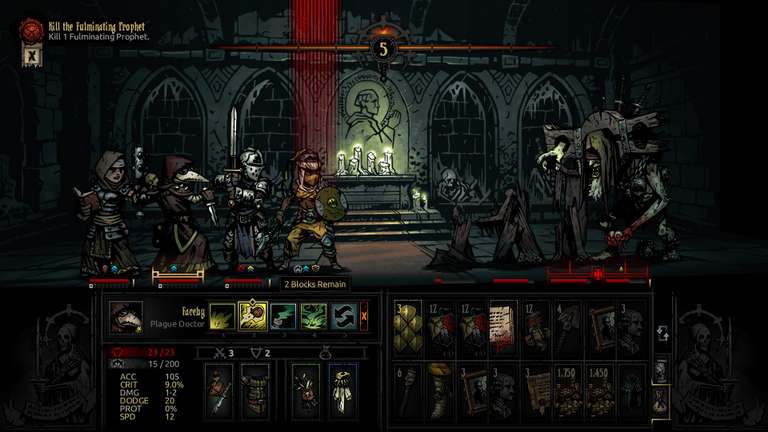 The Hellion works very well with her skill that strikes in the last position when placed in the front. The members of the group will never be moved by the Prophet in this fight so she can just stay there and beat him every turn.

The Arbalest is also a good choice since she can attack the back easily with her crossbow.

Finally, this is one of the few fights where the Occultist is a better choice than the Vestal as a healer. He can mark the Prophet or decrease his damage during the turns where Rubble of Ruin doesn’t hurt too much.

This group would be my first choice. It is incredibly defensive; on one side you have the Man-at-Arms that can protect the weaker heroes in the back and on the other, the very agile Shieldbreaker that can completely prevent Rubble of Ruin damage with her shield.

The Occultist marks the Prophet and heals the heroes if a Rubble of Ruin manages to pass. The Arbalest and the Shieldbreaker will do good damage on their own.

A more aggressive alternative. Here, you replace the additional defense against Rubble of Ruin from the Shieldbreaker by a Hellion in the first position that strikes the back with all her might every turn.

An example of a group that I would recommend if the Occultist is not available. The Arbalest stays at home since she can not take advantage of the Mark skill and is replaced by a Plague Doctor who will throw plague grenades. Her healing skill can be helpful in this fight to eliminate the affliction of a character who falls to 0 life after Rubble of Ruin, to make sure he stays alive.

An example of a group I would recommend if the Man-at-Arms is not available. He is replaced by a Houndmaster who also has a protective skill, but it is much riskier. Here, the goal is to finish the fight as soon as possible. This group does a lot of damage, with both the Houndmaster and the Arbalest receiving a damage bonus from mark.