The Shrieker is a strange and rather unique fight in Darkest Dungeon compared to the other bosses. One point to note is that you can not really choose when to fight it.

It is entirely based on Hamlet's events, one involving the theft of 8 charms stored in your inventory, and the other a quest to obtain a unique charm.

With an extremely high dodge, the Shrieker is hard to beat.

The objective of the fight is simply to survive

Winning does not require killing the Shrieker. Just survive 4 rounds, until it flies off and you'll win the quest.

Killing him does not prevent the mission from happening again. You do not even get an extra reward for killing him, so there is no real incentive. It is essentially an endurance test against a volley of devastating attacks.

One thing to note: if you manage to destroy the Shrieker's Nest, you get between 1 and 5 items worth 3500 gold each. The nest changes position during combat, sometimes it is at the front, sometimes at the back. 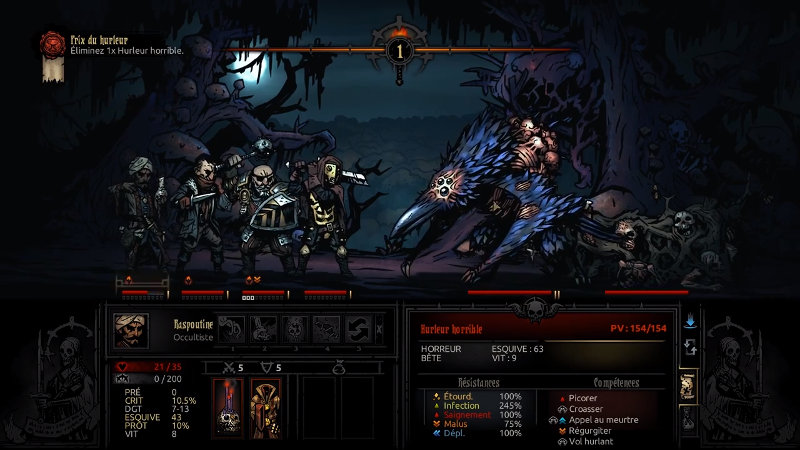 So, the real goal is to survive his attacks while trying to break his nest to get nice monetary rewards.

The Shrieker's quest starts right away with the boss fight, so bringing things such as food, torches, shovels, and pass-runs is useless.

Instead, bring medicinal herbs, holy water and bandages to make the fight a little easier.

Man-at-arms up front with the guard skill and the dodge bonus for the group.

The Houndmaster is used for his guard skill that provides an excellent escape bonus, as well as the fact that he can do good damage on the Shrieker's nest from all ranks. His stunning ability can also help.

The Vestal heals turn after turn.

The Arbalest can also attack the nest on all ranks, and use her heal skill to assist the vestal in the survival of the group.

The Shrieker has a lot of life, a lot of dodge and attacks three times a turn. Its final action (third attack of the fourth round) inflicts a lot of stress on the whole group, then it runs away.

Its other attacks combine a lot of damage and a lot of stress. Most attacks inflict bleeding and diseases, so the bandages and medicinal herbs are rather useful!