In this guide, we’ll take a look at the Robot character.

The robot is the third class and instead of directly using dice, you’ll be trying to hit the jackpot with the “Calculate” ability. I’ll go over that mechanic in detail and give a few tips along the way. 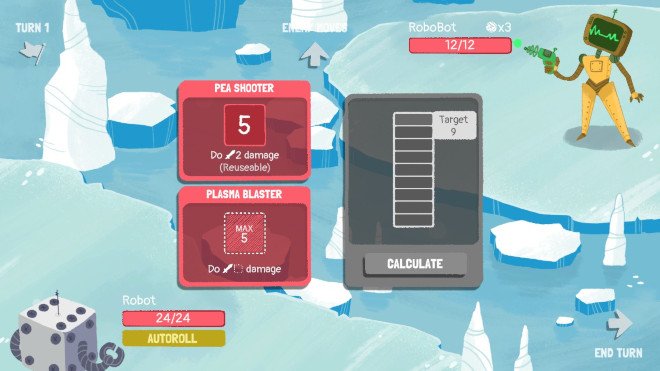 The robot’s CPU is on the right side during battles and has a “calculate” button. This button rolls new dice that you can use on your equipment. You can keep using the calculate button until you either hit the target or go above it.

If you go above the target, all of your equipment gets deactivated, effectively ending your turn (there are exceptions). Try to always use your remaining dice before using the calculate button if there is a chance to go over the limit. 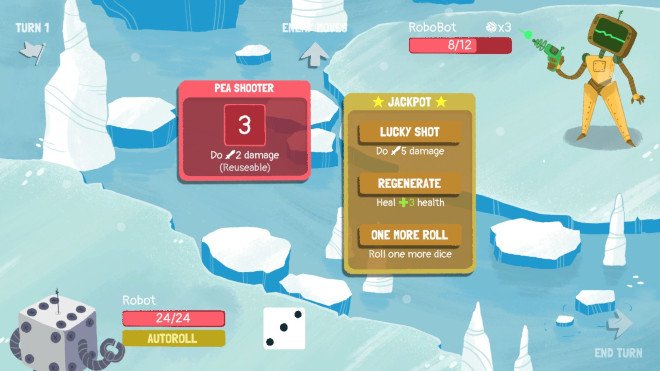 On the other hand, should you hit the target, you will get a bonus, which is a choice between dealing 5 damage to the enemy, healing yourself for 3 hp or rolling a dice. The first two choices are usually better.

This weapon gets offered with Ultima weapon which is probably the best dmg item that is available to the robot.

I’m not quite sure if there is a situation where this sword would be better, as getting errors is trivial and happens at the end of a turn.

Forcefield is simply an amazing shield. In the later rounds when the robot’s maximum CPU is higher, it is common to roll 4 or 5 dice per turn.

That’s 5 or 6 shield from a single item that you can activate with a 1.

Like the witch’s Hall of mirrors spell, this is a skill where you sacrifice the beginning of a fight in order to become an unstoppable machine later on.

This one complements Forcefield really well since they’re even/odd and both based on the number of dice rolls in a turn.

I’m not a big fan of this one. It gets offered early in a dungeon, at a time where rolling 4 dice is not the norm. Getting only 3 dice is still quite frequent at the end of a dungeon.

The upgraded version is fine though.

This is really strong, especially when it is upgraded. You basically get a double damage attack that works with any dice on a limit break.

The +2 from the upgrade makes it as strong as a broadsword on the rounds where you don’t get a jackpot. I always upgrade this first when I get it.

Episode 1: Rise of the robot

This is almost the same as the first episode. Just make sure that you use your dice one by one as soon as you get them, and never use the “Autoroll” limit break at the beginning of a turn.

Wait until the next calculation might go above the limit and you shouldn’t have too many vanishing dice!

Episode 3: You choose, you lose

This episode takes RNG to another level, as you now select your dice rolls with a 50% chance of locking the number of the dice roll + breaking a piece of equipment each time. 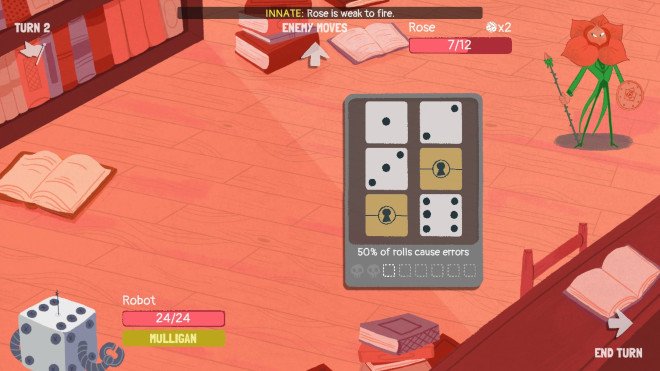 Your limit break becomes “Mulligan”. With it, you can choose to restart a round where RNG went completely wrong.

The way to go here is probably to always select the strongest dice that you can play first, and to keep mulligans for really, really bad rounds!