After several months of hiatus I decided to go back to the modest Fisherman Bob riverland farm.

Bob is at a point in his life where he needs a ton of iridium ore to progress. And as you know, the best way by far to find iridium ore in the valley is to explore the depths of the skull cavern.

But it’s not always easy.

In this article, I will offer various tips that will help you have more success in the cavern. Most of them are minor, but when you apply several of them, it starts making a real difference.

Use a good weapon

Tip: buy the lava katana if you don’t have the galaxy sword.

Unlocking the skull cavern means that you completed all 100 levels of the mines, and doing so means that you received the obsidian sword as a reward.

It’s pretty good… for the mines:

The problem though is that it doesn’t really cut it (ha!) for the Skull Cavern. It’s fine for the early levels, but if you want to make it far, you need to be able to kill enemies quickly. You need to kill all purple slimes as they have a chance to drop iridium ore.

From there, you’ve got two options for your next weapon.

I’ll start with the realistic one:

The lava katana can be purchased from the Adventurer’s Guild for 25k gold and is just way better. It’s minimum damage is 20% higher than the obsidian edge’s maximum damage and its attack speed is also higher.

At this point in the game, 25k gold shouldn’t be too hard to get. The investment is worth it.

Let’s move on to the less realistic option:

The galaxy sword is the strongest sword in the game but it requires a Prismatic Shard. You must hold it at the center of the pillars of Calico Desert and it will turn into a sword.

The shards are a super rare drop from omni geodes, treasure chests or monsters and many players play for several in-game years before even seeing one. Nothing much you can do about it, it’s based on luck.

If you have one, congratulations! Your life in the Skull Cavern will be easier.

If you don’t, the lava katana does the job well.

Tip: favorize lucky days and use food that increase luck.

According to the wiki (https://stardewvalleywiki.com/Luck), luck has an impact on quite a few things related to the skull cavern:

Each of those will increase the profits made from your skull cavern runs, so we’re going to try to raise luck.

The first step is simple. When the day starts, I like to turn on the television and check the fortune teller channel for the daily luck bonus.

It’s a very arbitrary rule, but except in winter, I won’t go to the cavern if the spirits aren’t at least neutral. When they are displeased like this, it’s probably better to stay home and work the fields: 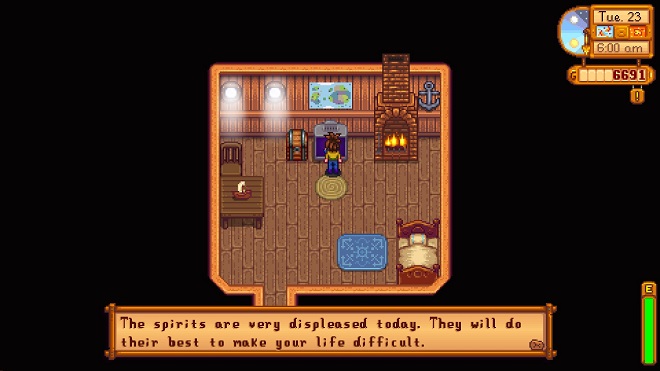 The second way of buffing your luck is with food.

I won’t claim they’re the best but here’s two food items that are pretty easy to craft and that are useful for the cavern.

The ingredients for pumpkin soup (+2 luck / +2 defense) is worth a good bit of money, but they are both easy to get without work if you have the auto-grabber: 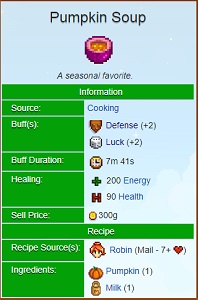 Spicy eel’s ingredients on the other hand aren’t worth much, but you have to fish the eel: 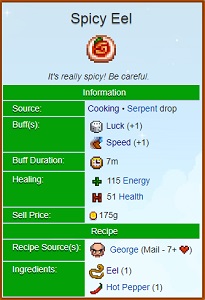 Blow stuff up with bombs

Tip: start using bombs in addition to your pickaxe. Craft them with ores you don’t need until you can buy some from the Dwarf.

Bombs aren’t needed for the normal mines, but they make the difference between a good run and a bad run in the skull cavern.

You have to use them to find success. 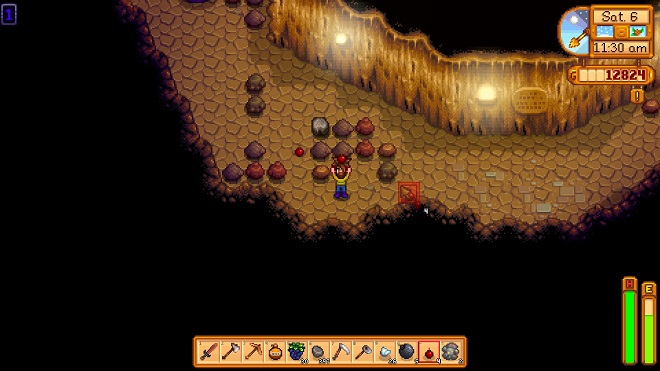 The easiest way to get bombs is to buy them from the Dwarf in the mines. They’re a good investment for the cost, but your character needs to speak dwarvish (find all 4 dwarvish scrolls) for that and you most likely won’t have by the time you start exploring the cavern.

So the more realistic way to get bombs is to craft them by yourself.

The good news is that when you get to the skull cavern, you probably will have all the basics covered and won’t need copper and silver ores anymore.

Transforming them into cherry bombs and bombs is definitely worth it. If you’re still in the first year, you might want to buy a stack of ores from Clint at the blacksmith, as the cost will end up being pretty close to if you could buy them from the Dwarf.

NPC prices double on year two though so from there on, it’s not worth it.

Tip: keep a stack of rocks in your inventory. Craft a new ladder and skip the level when you get in trouble.

Did you know you can craft the ladder that leads to the next level?

There’s videos around of people that buy 10 000 stones from Robin at the Carpenter’s Shop to be able to go straight to the depths of the skull cavern but I don’t think that’s very realistic.

I don’t know about you but I hunt for iridium ores to be able to craft stuff that will allow me to increase the income of my farm. My character is not rich and can’t spend hundreds of thousands of gold on a skull cavern run.

With that said, ladders are still incredibly useful and I would recommend keeping the hundreds of stone you will inevitably mine over time in your inventory. 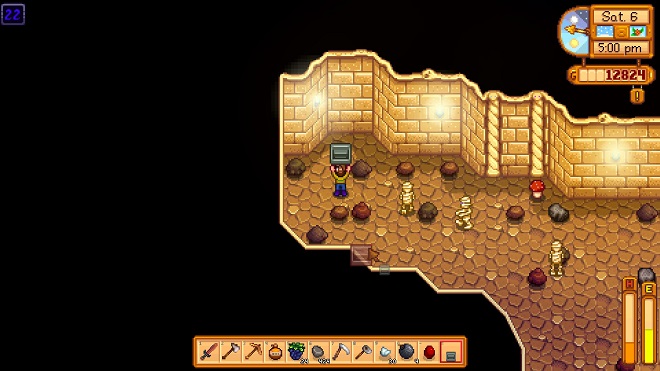 Use them to escape situations where you are in trouble with monsters.

For example, a room with several flying monsters. They’re annoying and hard to kill without losing some health.

Tip: have at least a gold pickaxe before running the cavern.

This one is obvious but make sure to upgrade to the gold pickaxe before attempting your first run.

It’s a great investment anyway, as the gold version allows you to clear the meteorites on your farm and get your first iridium ores from them. Even if you use bombs in the cavern, you’ll still be using your pickaxe a lot and the steel version isn’t good enough.

Later on after you have your first iridium sprinklers, consider upgrading all the way to iridium pickaxe to speed things up even more.

Don’t get discouraged if you don’t get far and don’t bring iridium ores home the first few times. With a bit of practice (and bombs) you’ll get farther in the Skull Cavern and will soon have a ton of ores.