Break rooms are a crucial part of your workshop and you learn a little bit about them during the in-game tutorial when one of your workers collapse. But I'd like to explain the way they work in more detail.

Mood of the little guys

If you click on the small room effect icon on the upper right corner of the screen, you'll see a colored overlay on the floor of each room as well as a mood score: 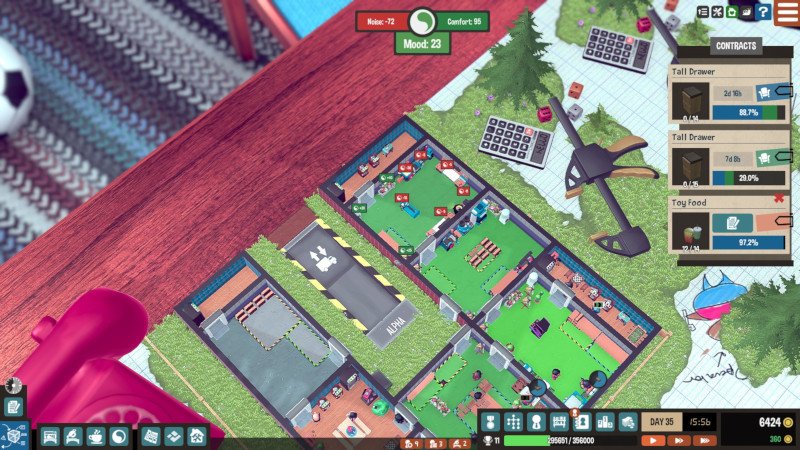 The score is simply the positive impact of the decoration in the room minus the negative impact of the noise of the workstations. The higher the better, but it might cap out at +50 mood as the floor color doesn't change after that.

The higher mood is, the longer a worker can work before needing a break.

They need a break

Once a worker needs a break, he'll start moving towards the closest break room that has available refreshments.

To explain how it works, let's have a look at my thin break room here: 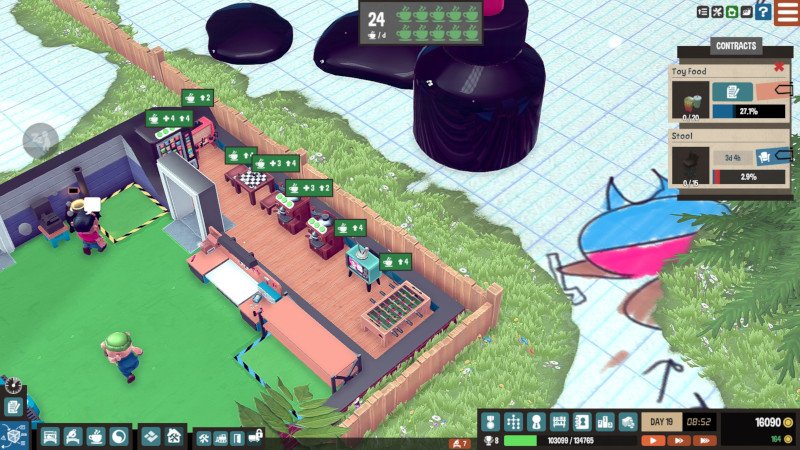 On top, you can see 10 green icons of coffee cups. That's the refreshments that are currently available at vending machines and coffee machines.

It effectively caps out at 10 so my recommendation would be to go for one vending machine (four refreshments) and two coffee machines (three refreshments each) when you have enough space.

Next, you'll also see the number 24 on top. That's the daily regeneration rate for the refreshments of the break room. So for example, adding a chess board will increase by 4 the refreshments added to vendor/coffee machines during a day.

At first, I thought a table was needed since the workers sit on it.

You could have a super tiny room with a single coffee machine if you wanted.

You might feel the temptation of going big the break rooms. Like, designing a massive break room at the center of the workshop with a long row of coffee machines and several tables.

But it doesn't work well for two reasons.

First, the daily regeneration bonus halves after the first item is placed. The second chess board takes just as much place as the first one but increases the regeneration rate by two instead of four.

Second, moving back and forth between workstations and break rooms takes a lot of time and is highly inefficient. Short distances are better.

In the previous picture with the thin break room, I believe the width was only 3 meters and I was able to cram a ton of items in it. Later in the game, I added several other break rooms that were even smaller than that.

Those tiny break rooms can be added close to those that tend to have too many workers and go out of refreshments.