A sandstorm of grace and fury, the Shieldbreaker dances through the ranks, delivering precision strikes of remarkable power.

Sundering armor, breaking enemy formations, and leaving the taste of venom wherever she goes, the Shieldbreaker is a remorseless combatant.

The shieldbreaker is extremely versatile and is able to use blight attacks, easily make critical attacks and pierce the armor of more defensive enemies who have a high level of protection.

She is able to attack all ranks at the same time with her AOE, or attack any rank for higher damage with her spear. He is one of the most mobile heroes.

Defensively, can also mitigate the damage completely with her shield, a unique skill that is very useful.

Probably the best basic attack of the game. Good basic damage, a high level of critical strike, which works on all the ranks and which pierces protection.

What more is needed?

An attack that breaks the guard of an enemy protecting his ally. It is a very situational skill that can be useful for some specific fights.

An attack that deals 5 blight damage for 3 turns. Combined with good basic damage, the skill is very powerful and deals a ton of damage.

This hits all enemies and deals 2 blight damage for 3 turns, in addition to basic damage. One of the most powerful combat skills in the game!

Less useful than her other skills. It allows you to attack stealthy enemies, but most of the time, it is better to just wait for a stealthy enemy to naturally lose his stealth.

An attack that deals 5 blight damage for 3 turns and which works particularly well in mark groups (135% against marked enemies).

Superb ability to prevent damage, especially when the shield breaker is positioned at the front. The amount of damage received does not matter, everything is blocked! Bleeding and infections still work though.

This skill alone makes some fights much easier (like the prophet boss fight). 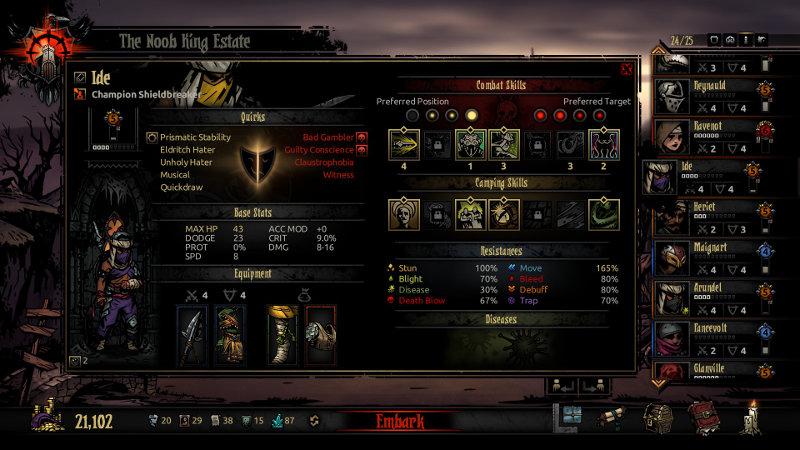 With this build, the shieldbreaker can deal a ton of damage on all ranks. She can move forward or backward, attack all enemies with Impale and pierce the protection.

Adder’s kiss is added for additional infection damage on the enemies in the front, and serpent sway makes it much easier to survive when things go wrong!