Hey guys! Today, we're going to have a look at the alchemy system of Graveyard Keeper. It's a bit complicated, but learning some alchemy makes the rest of the game way easier.

I won't be giving a complete list of alchemy recipes in this guide (the wiki is great for that). Instead, we'll keep it simple. I will give a few tips regarding alchemy and share which are the recipes I believe you should actually be using and why.

I chose to talk about this one first as raising zombies will have a major impact on your quality of life as a player. With zombies, you can automate a good part of the resources gathering grind and a small part of the production.

This should be your first goal regarding alchemy.

You will get 3 zombie juices (and a free zombie) by doing the quest with Gunter, but if you're motivated, I'd say you should aim for around 10 zombies in total. Maybe even a bit more. 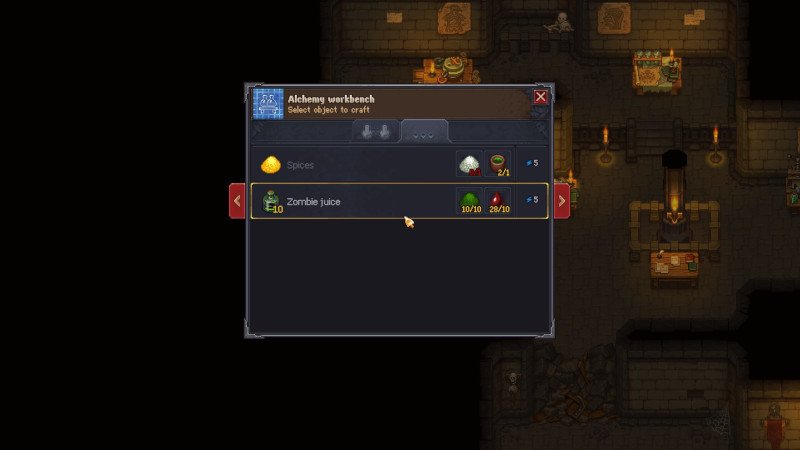 I like to always have several zombies at work gathering resources: wood, stone, iron and marble, each with a few hauling zombies that go back and forth bringing the resources back to your base. And I also like to have a few more zombies available that I can move around for workstations, crates or farming.

The bottleneck here is faith, which you won't have a lot of at the beginning of the game. Don't stress it and get more zombies over time, slowly but surely. By the end of the game, you'll have so much faith you won't know what to do with it!

Next, you'll combine the zombie juice with 10 faith and a corpse at the resurrection table to raise a new zombie.

Next up is black paint, which is required to make ink and paper. There is a quest in the early game that requires ink and paper and it's more simple to complete it by just buying it from an NPC, but it is still extremely useful later in the game to craft pretty much anything at the church desk. 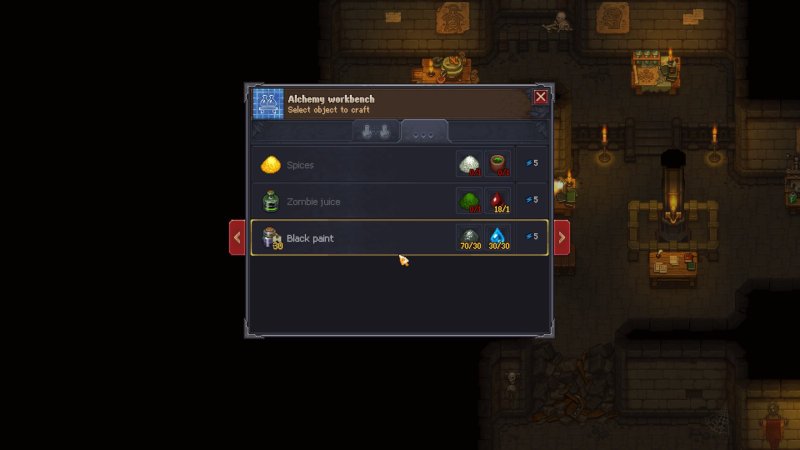 There are three ways to craft it, but two of them require materials that are hard to get and in very limited quantities (ash and dark powder).

The third way is quite easy. Put coal into a Furnace III to make graphite. Next, transform it into graphite powder with the Alchemy mill. You'll have a lot of black paint and be ready to start making crafting stuff at the church desk.

Unlike black paint, white paint doesn't seem to be very useful. You can already make the paper more easily with other recipes, and candle production is a bit of a hassle (beeswax) for a little temporary boost to church quality. It doesn't seem to be worth the time.

Heal potions are pretty hard to come by in the game and they are quite useful for completing the dungeon and the quests associated with Snake.

Luckily, they're very easy to craft. 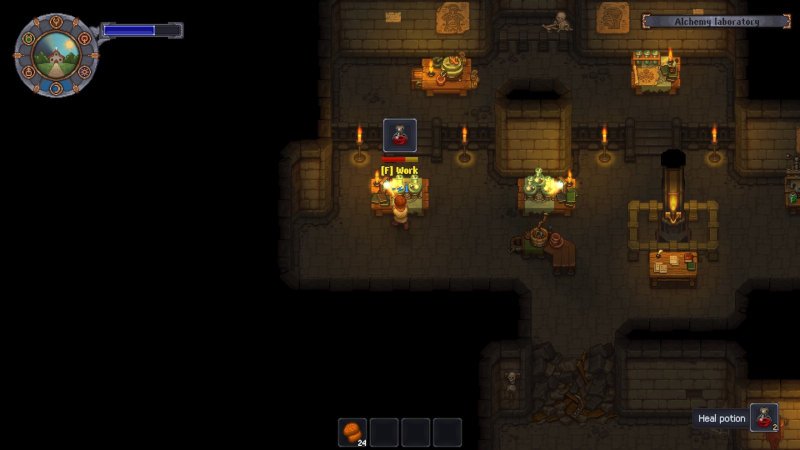 Spend a night picking flowers and you'll end up having a ton of Moths, that each can be turned into 2 chaos solutions with the hand mixer. Mixing a surplus of bat wings also works.

Combine them with the health powders that you got from crop waste at the alchemy mill. You'll now have more than enough heal potions to complete all levels of the dungeon!

Speed potion is a nice quality of life item that makes a big difference. In a lot of games, temporary speed boosts aren't worth it as the duration is too short or the boost isn't big enough.

You get a blue timer at the top of the screen when it is activated and the timer goes a bit faster when you go to sleep. It's hard to play without it once you start using it.

Glue injections add 1 white skull to a corpse. They will probably be the first thing that you will be able to craft and use for embalming, and they always are useful in the game. They never become useless. 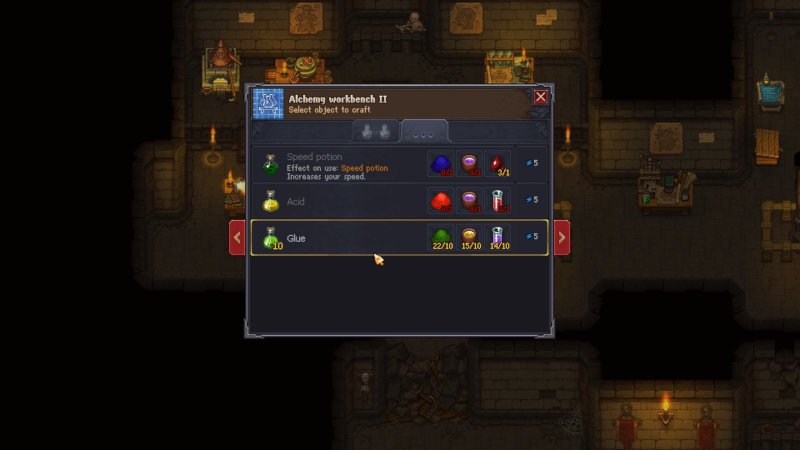 Next, you'll want to transform those glues in usable glue injections :

From these, you'll probably want to start using the glue injections on any corpse that you intend to bury or to revive as a zombie. It's an added bonus, with no negative effect!

Silver injections add 1 white skull and remove 1 red skull from a corpse and like glue, they're something that you'll want to use on all bodies that you intend to bury or revive as zombies.

It requires silver nuggets, which is considered a rare resource but is actually very easy to get!

The trick is to get the “Scent of Gold” passive skill under the building technology tree first.

Next, go mine iron ore blocks by yourself at the quarry. I'd say the chance to get 1 or 2 silver nuggets is about 20%. Bring them back home (with hauling zombies) and process them manually into iron ore for another chance of getting silver nuggets : 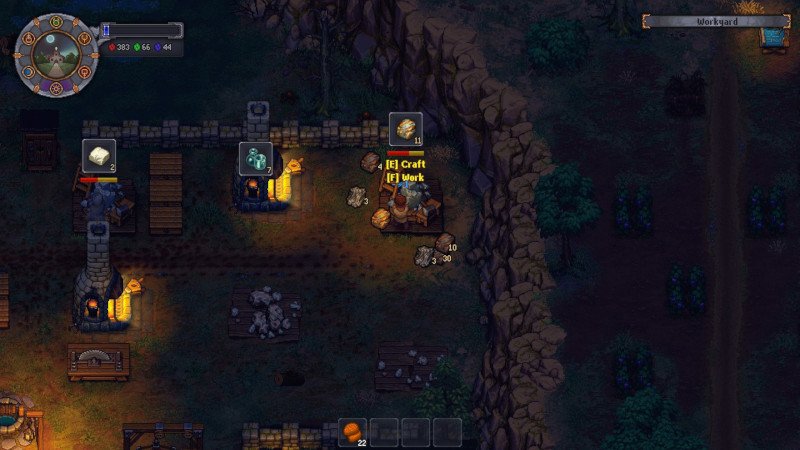 Each silver nuggets gets crushed into 4 silver powders at the alchemy mill. Chaos solution is from moths, and order extracts are from white flowers :

Gold injections are twice as good as silver injections. They add 2 white skulls and remove 2 red skulls, but they're much harder to make.

You can also get it from mining or processing iron ore but where silver nuggets had a 20% or so drop rate, I'd say gold nuggets is around a 2% drop rate.

The better way to get it is simply to find a gold vein on floor 6 of the dungeon. There are four gold veins that can be found in the dungeon and they each yield 8 gold nuggets. That's like 160 gold injections from a single gold vein! 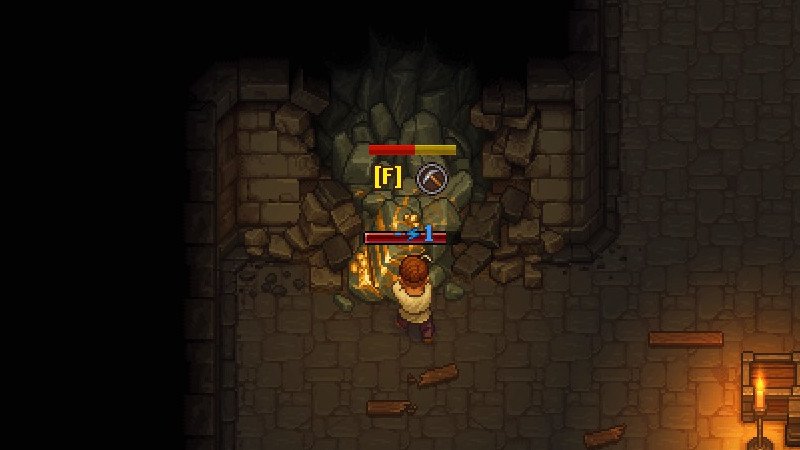 Lye injections are probably a bit overkill, but they're something you need to use to make perfect 12 white skull corpses. They add 1 white skull and 1 red skull.

You don't need to think about adding red skulls before having silver and gold injections.

Finally, crafting fertilizers of the highest quality level is mandatory to complete the Inquisitor questline and for that, you need flavor enhancers.

They're also super useful for farming as with them, you can improve crops to gold quality and start farming exclusively with gold seeds.

Flavor enhancers require ash, which you can easily get 5 of by cremating a corpse. Toxic solution comes from red mushrooms and life extract from yellow flowers.

Two flavor enhancers can be turned into 10 maximum quality fertilizers :

Well, I think that covers alchemy pretty well. There are dozens of other alchemy recipes but most of them aren't really useful.