Completing the Episodes of Dicey Dungeons

To beat the game, you need to complete 6 episodes for each character. The nice thing about the episodes is that they greatly alter how the dungeons are played. They add good replay value.

In this article, I will list the episodes and give a few tips along the way. Episodes #2 and #3 are unique to each character while the other episodes are the same for all characters.

The first episode has no special rules and is meant to introduce you to the characters and how they work. They can still be challenging (I lost the first episode twice with the Witch) but they are generally easier than the other five episodes.

Once you complete the first episode with a character, you gain access to the episode selection screen and must from now on select an episode before starting a dungeon run.

Those two are unique for each character and most of them are much harder than the first episode. Here is the list :

Warrior 3: Worse than a curse

Robot 3: You choose, you lose

Inventor 3: The inevitability of rust

Jester 2: Not just a jester

Episode 4: The elimination round

Just like the first episode, this one has no special rules. The difference is that the enemies have 10% more health and all of their equipment is upgraded.

To succeed, you will need a decent character build!

This episode is radically different from the others and although the basic mechanics are similar, everything else is completely different.

It is a breath of fresh air and you might have to restart the episodes a few times here since what you learned so far doesn’t apply. 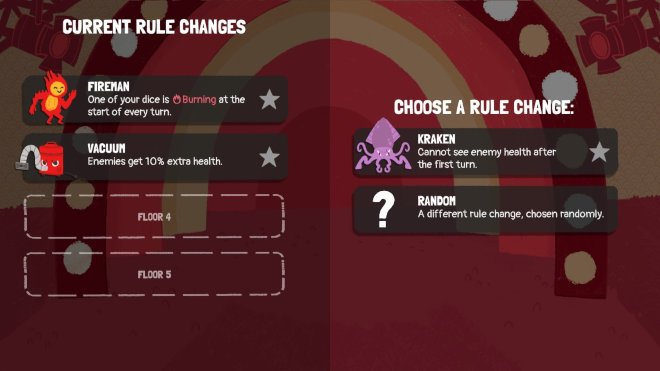 In the bonus round, a new random rule is added to the dungeon at the end of the first four floors. Some of them are minor annoyances (Kraken) but others like Loud bird or Scathach make things way harder.