This article will wrap out our Dicey Dungeons character series. Today we’re going to have a look at the thief. He’s quite straightforward and plays like the warrior, but with him, low dice rolls are better.

If you’re into damage over time poison skills, doing a ton of low damage attacks in quick succession or stealing enemy’s skills, this class will be right up your alley.

Let’s have a look at the items first.

The weapon the thief begins a dungeon with. You can use an infinity of max3 dice with it during a single turn and it becomes very powerful once upgraded if you can generate a lot of dice.

It is the main weapon of a thief that doesn't go for a crowbar build.

This is redundant when you have a dagger. The upgraded version deals 4 damage with 2 dice and that's good, but the dagger is not too far at 3 damage and can also use 3's. The dagger is the superior weapon.

This is a bit of a weak filler item at the beginning of the dungeon, but the upgraded version's 4 damage is nothing to laugh at and it can work well with the crowbar build.

This one is hard to use and it isn't very good.

I guess the upgraded version could work as a complement to the dagger if you were able to generate a lot of low dice. Use them all on the dagger and end the round with a high damage backstab.

This is probably the most important item if you want to play poison. I like it a lot. Since poison builds up over rounds, it pairs well with more defensive items that slow the fight down.

A key item that defines the thief. Countdowns are the big numbers that you need to bring down to zero to trigger the effect.

I explain how the crowbar works more in details down below.

This gives you an additional dice every round. It's very good but I tend to upgrade it when I want to use it. Otherwise, it takes a lot of equipment space.

This is a very small repeatable heal. It's not the greatest heal but it pairs decently with the thief's limit break that generates four 1's.

Throw a 1 or another odd dice in there and you receive 1 less damage from enemy attacks during their turn.

It's better than the bandage when enemies hit many times per round and for low damage.

Twice the damage mitigation of the leather armor, but harder to use. I really don't like items that require specific numbers like the 5 here and personally wouldn't consider using it without the upgrade.

It's definitely stronger than the leather one once upgraded though!

The crowbar is an item that I believe gets systematically offered on the second floor and that can bring a completely different playstyle than the usual spam of low dice attacks with the thief.

To explain how it works, let's look at this image : 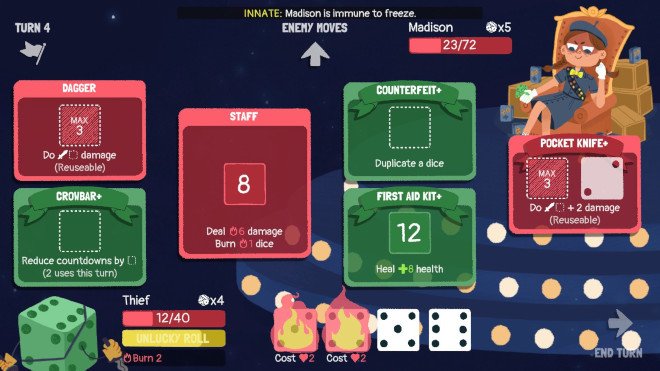 The build above is bad (I still won), but it will work as an example. Let's say you use the 6 on the crowbar. Both the staff and the first aid kit countdowns will lower by 6.

The example above with two countdown items is a bare minimum.

A crowbar build becomes strong with three countdown items. If I replaced the dagger by a poison slingshot or an upgraded pea shooter, the build would become pretty good. Any 6 used on the crowbar would have the effect of 18 worth of dice.

The only problem is… You usually won't have countdown items by the time you get the crowbar. And you definitely don't know if you will get three decent countdown items later in the dungeon.

So it's a bit of a gamble. When it works well, you become unstoppable. And when it doesn't like in my example above, you're glad you kept your dagger in your backpack!

Episode 1: Thief in the night

I thought this episode was quite difficult. The problem is that the ability (steal equipment after the fight for 12) and limit break (can reuse equipment) are both useless early in the dungeon.

So you’re stuck with the dagger and the lockpick.

Survive long enough to steal good enemy skills and you’ll be fine though. If you're stuck, try to fight Rose on the first floor and steal her thorns ability!

For this episode, try to get an item that can put to use your high rolls ASAP. If you don’t, you’ll end up having a lot of problems with the 4, 5 and 6 turns. Something like poison slingshot is perfect.

The new “Trips” limit break here is quite powerful. Even at the start when you only have a dagger, you can choose to roll three 3 dice for an instant 9 damage.