This time, we’re going to have a look at the witch character. She’s unique and plays very differently than the other dices and personally, I find her to be the most challenging of all characters by far.

When I do get Hall of Mirrors going with other good spells though, it feels like there is absolutely no way I could die on a floor or to a boss, even if it kept going forever. Her status effect spells combined to the bonus dice and the way that you can easily cast the same spell several times in the same round (including shields and life leech skills) is super strong.

In this article, we’ll go over the spellbook mechanics and the list of witch spells that are available. 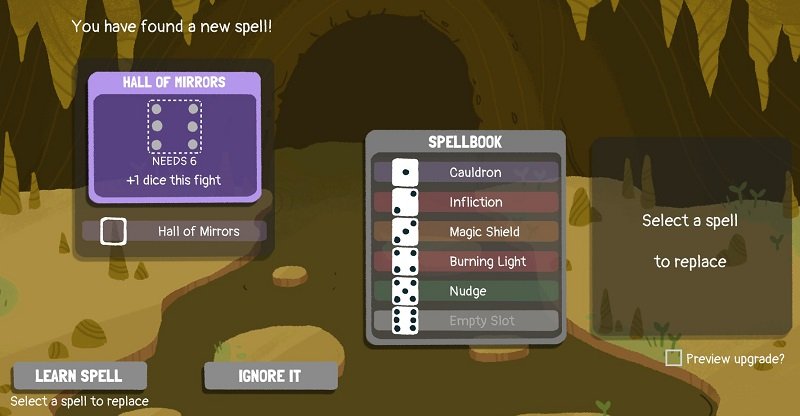 The way the Witch’s spell system work isn’t complicated but it’s very different to the first characters. Your spellbook has 6 pages (two are filled at the start) and when you find a new spell, you can choose to fill a page with it.

You can overwrite the pages as you want, but you lose the old spell when you do. They can’t be moved from page to page.

For example in the picture above, I just found the Hall of mirrors spell and I can either put it on the empty 6 slots, overwrite a previous spell on the other 5 slots or simply ignore it.

After that, you get 4 spell slots during a battle and can activate a spell to a slot by using the dice that corresponds to its page position in the spellbook.

And there is no limit to how many times a spell can be used. You could, for example, have Magic missile in all of the 4 spell slots.

There's going to be quite a few spells missing here, but I believe I'm covering a good bit and I'll add the remaining in my future runs.

You will find the base version of the spell on the left side and the upgraded version on the right side. You can upgrade your spell slots by leveling up and selecting the upgrade option.

I chose to list this spell first as it seems to be designed as the main way to become stronger as turns pass with the Witch. It is systematically given to you on the first floors in all dungeons.

You start off with 3 dice but each time you can Hall of mirrors, you permanently gain an additional dice for the next rounds. It will take up a slot and eat up precious dice that won’t deal any damage in the first rounds though, so you might not want to use it in some situations.

This is a good spell, as it does fine damage when you use high dice and inflicts shock, which, like freeze, is a superb way of mitigating damage.

Shock is better on the first floors, where enemies have very few dice. It often stops them completely from doing something during the round.

It is similar to electric shock, but you trade shock for freeze. I feel like freeze is the best status effect for mitigating damage; transforming high dice into 1’s is just so good.

The fire version. This is the most offensive one and often a good offense is the best defense. Burning dice really makes the fights end faster. One reason I feel make burn so good is the AI doesn’t seem to make great decisions related to it.

It seems like the enemy will just use his burning dice no matter what, even though it often ends up being a terrible move.

The base damage ability you get when starting the dungeon. It is a bit weak.

A much better infliction. I feel like the upgraded version is pretty strong at 7 damage, especially since it is possible to cast it with very low dice.

Poison works well if you are able to cast the spell twice per round. Cast a few of them, hide behind magic shields and you’re good to go!

A good spell to have stronger battle starts, I think it’s a good alternative to Hall of Something. As long as you’re getting good rolls, it’s just like if you started with an additional dice.

I’m not a big fan of this one as it deals no damage. There are way better options on the Witch that both inflict status effects and deal damage.

When compared to the warrior’s shields it isn’t great, but you’ll be using it a lot as the witch to stay alive. Do not hesitate to cast it more than once in the same turn if you feel like a lucky roll of dice from the enemy might cost you the battle.

Freeze is probably your best friend if you want to make the Witch easier. I would suggest systematically getting Ice shard / Blizzard when it is offered to you. It really makes a big difference.

Speaking of spells, one trick to have a slightly more balanced build is to put “even” spells on “odd” numbers and “odd” spells on “even numbers”.

For example, if you get Magic shield and think you’ll be using it a lot, put it on the number 2. That way in some cases your life will be easier, as dice rolls ultimately tend to be balanced. The number 2 to invoke it is an even number and you need an odd number to cast it.

A very minor tip, always use the throw dice ability when you have burning dice with the witch. Instead of taking two damage, you’ll be dealing two damage.

Finally, it takes some preparation to become powerful but getting a new “prepared slot” instead of an “upgraded slot” is great to set up a combo. I myself like to get a new prepared slot + an upgraded slot in my runs (you get it offered twice per dungeon).

I feel like two prepared slots are enough to set a great start. For example, say, a Duplicate + Blizzard prepared slots combo. You probably won’t need Hall of mirrors there. You’ll be hitting hard from turn one.

A very basic prepared slots combo that works well is Electric shock or Magic missile + Magic shield. Those spells are very well balanced. One is “even” and the other is “odd”, one is offensive and the other is defensive, and they work with any roll.

This episode is super easy. Just replace the starting spell by the Hall of mirrors that you always get early in a dungeon.

Since the gimmick of the episode is that you always start with a 6, you can always add a new dice in the first round. And you’ll always get another 6 on the second round, so…

Sky’s the limit I guess!