Hey guys, I’m back with another character guide. This time we’ll take a look at the jester class.

The jester is the very last character you will unlock but he’s actually much easier to play than the witch, and he generally feels a bit more powerful. I’d say he’s got less power potential for long battles but is a much faster starter, and his limit break is super powerful.

This article will cover unlocking the jester, his deck mechanics, and his abilities.

How to unlock the Jester

Unlocking the jester is very straightforward. You’ll notice that at the beginning of the game when doing the first dungeons, you sometimes fight an enemy jester.

Beating him as the dungeon boss unlocks him.

So basically, just keep doing simple dungeon runs and winning the jester fights until you fight him one last time as the dungeon boss.

The jester has a deck of cards instead of equipment. In the normal run, he starts with a deck of 14 cards. And instead of finding items, he finds new cards that can be added to the deck.

Sometimes at the shop, you’ll be able to destroy cards that don’t really fit into your deck: 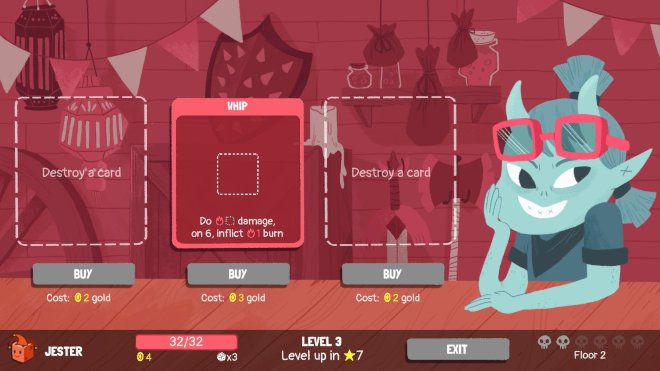 When a battle starts, the jester draws 3 cards which you can play by using your dice.

Next, whenever you play a card, the top card from your deck is drawn to replace it. You usually see the next 3 cards that are sitting on the top of your deck so it helps to plan if you should be making a move to get the next cards or not.

There is no limit to the number of cards that a deck can have, but it’s better to have a lot of copies than a lot of singles. I’ll talk about it next.

I wanted to write a bit about the jester’s Discard ability and his Snap limit break as they are unique and very powerful.

They both work the same way. When two (of all three) of the three active cards that you can currently play from your deck are the same, you can choose to use the ability.

When it’s Discard, it will throw those cards away. It’s very useful as a way to have a stronger turn by throwing away some of the first cards you start out with.

And when it’s Snap, it will play the cards for free instead of throwing them away. That’s incredibly powerful. You sometimes end up using the whole deck without even needing to use your available dice.

Even better, you can keep your Snap limit break for a difficult battle and use it straight on the first turn. The jester is probably the only character that is able to realistically achieve first turn kills. 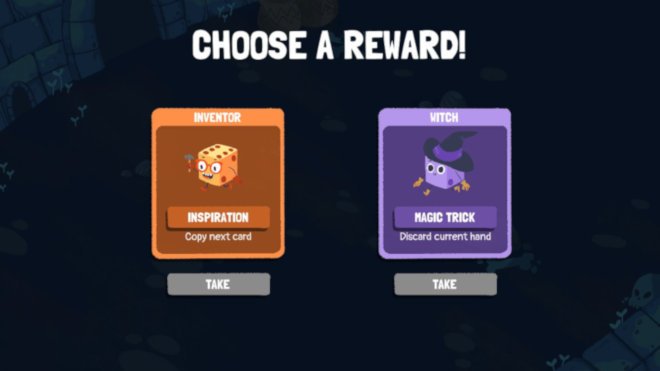 The character special cards like in the image above are great as they don’t require dice, but be careful about the Robot and Thief ones as they add a random new card that won’t work well with your Discard / Snap abilities.

On the other hand, the two above have good synergy with Snap as they either create a duplicate or clear your hand to make a place for possible duplicates. 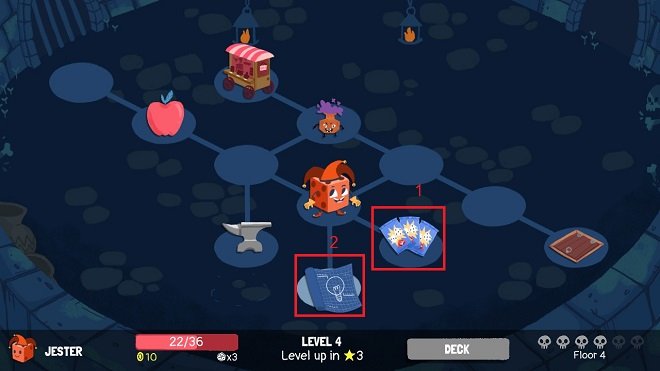 For the same reason, it’s often good to skip chests and merchants as the cards received are singles that won’t work well with Discard / Snap. Boosters (1) on the other hand usually offer several copies of the same card so they’re good.

The blueprint copy (2) is also super good since it adds another duplicate. Try to always use it on a card that was first upgraded at the forge.

Episode 2: Not just a jester

Standard rules. The difference is, you start out with only a sword card in your deck instead of a normal deck. And your ability/limit break are replaced by the Warriors.

This is basically a Warrior run but with the Jester deck mechanics.

This episode is a bit tricky because you’re forced to add all enemy skills to your deck. Your discard ability is replaced by a “Destroy” ability that permanently destroys the card on the left for 5.

I found spending 5’s in a battle to destroy cards a bit too costly to be realistic to use well so I rarely destroyed cards. On the good side though, many enemy skills are super powerful.