Making sure your crops are watered is an important task in Stardew Valley, as your crops simply will not grow if you don’t do it.

Now, you start the game with the watering can which can be used to water a single crop. It requires a lot of energy but works just fine during the first season as you don’t have a lot of crops to tend to.

And then you plant more and more crops. You start eating food to have more energy to be able to tend more crops, you upgrade your watering can so that it waters a few crops instead of a single one and all is well until one day, you start thinking…

“I am clicking a lot and this feels like work. Isn’t there a better way to water crops?”

The answer is crafting sprinklers and using them wisely!

First, I think it is important to know that the very first one that you can craft at Farming level 2 is a bit of a waste of important resources and isn’t worth it.

Copper bars are extremely important in the early game. They are required for the Silo, the copper tool upgrades, the mayonnaise machines, and the tappers. Those are all pretty much mandatory for your early game progress. They are also quite handy later for the keg, which is probably the most profitable crafting item in the game.

Keep your copper bars for those instead.

Even if you did have too many bars, they only water 4 crops (top, bottom, left and right tiles) and end up being awkward, as you need to place them on different lines and columns if you want to water all crops.

This one waters 8 crops in a 3x3 square and is very good. A lot of players swear by the Iridium sprinkler and skip the Farming level 6 version, but I think this is a mistake.

Now, the first reason is that it is actually quite easy to craft them in the first seasons. The iridium version is hard to craft, but this one isn’t really harder to craft than the basic version. The copper bar is replaced by a gold bar, which you will get plenty of in the mines and won’t have any use for as your tools (and your wallet) won’t be ready for the tool upgrades. You will also have plenty of refined quartz.

At a time where I had to visit Clint to get copper ores since there were too many uses for them, I found myself being able to craft several quality sprinklers without even trying. I had no other use for the gold ores in the early game.

The second reason is, not only does it water twice as many crops as the basic version, it also targets all of the tiles around it in a clean, perfect square. This makes it so that you can make a clean layout.

Here is an example : 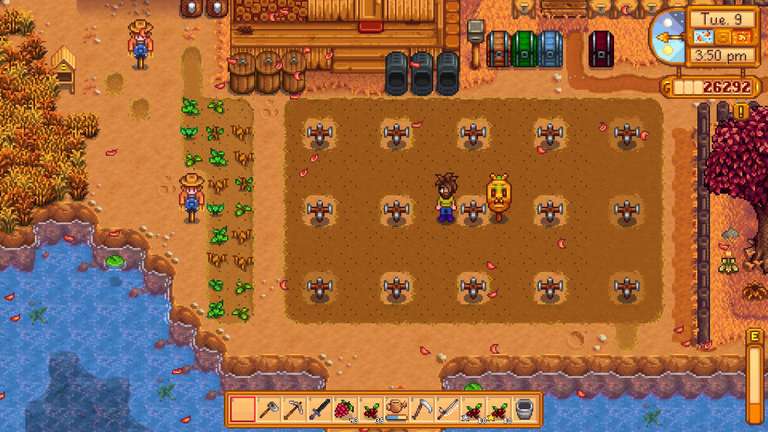 Finally, even though you will eventually find yourself replacing them by iridium sprinklers, the investment won’t be lost. When it happens, you can sell them back for 450 gold a piece, which is a pretty fair bang for your buck when you look at the resources that were required to craft them.

So my recommendation isn’t to skip them, but to craft a lot of them, and to sell them back on year 2 or 3 when you start getting the iridium. Think of it as an investment so that you are able to plant a lot more crops in the first years. The profits you will make will be greater than if you waited for the late game version.

The holy grail of crop watering!

Iridium sprinklers waters 24 crops in a 5x5 square, so you can leave 8 squares between each sprinkler : 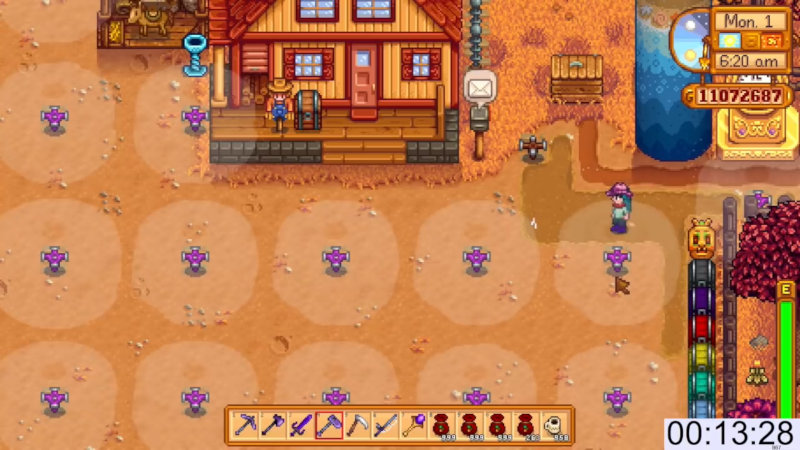 There really isn’t anything bad to say about the iridium sprinklers. They will increase your crop production exponentially and, with kegs and maybe pigs, are probably the one item in the game that helps generate huge profits.

The only problem is that the resources that are required are hard to get.

The gold bar is super easy. The battery pack is quite easy also, you just need to install several lightning rods around the farm.

But for the iridium bars, you’ll need to be able to go to the Skull Cavern in the desert. For that, you need to complete all 120 levels of the mine AND to repair the vault of the community center, which costs a considerable 42 500 gold.

This probably won’t happen in your first year, as the mine takes quite some time to complete and you won’t have tens of thousands of gold lying around in the early game if you keep upgrading your farm.

Once that is taken care of and you can enter the Skull Cavern, you also need to be able to survive it. The monsters are very strong and hit for a lot of damage, so you need good equipment. Iridium is also more abundant in the later levels, so you might also need bombs and staircases to reach them, and those are also expensive.

Finally, if you hate mining and fighting monsters, an alternate way of getting the sprinklers is to go buy one from Krobus in the sewers every Friday for 10 000 gold a piece. It is very costly but if you find yourself drowning in gold in the late game, it is a viable solution.

My sprinkler is not working!

It is, it’s just that the watering effect only triggers when a new day starts. So it won’t have any effect on the day that you place it on the field, but it will on the following morning.

How can I move my sprinklers?

Hit it with your axe or your pickaxe, it will become an item that you can place in your inventory.

Can I recycle my sprinklers?

You can’t, but what you can do is throw them into the box to get some money. The basic one sells for 100 gold, the quality one for 450 gold and the iridium one for 1000 gold. The upgrade from quality to iridium sprinklers can make for a nice little amount of gold!